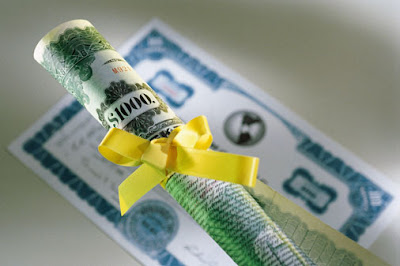 Convertible bonds are for those who can’t make up their minds whether to buy a bond or buy stock in a company.  Just kidding!  Nevertheless, it might be a good way to think about what convertible bonds really are as an investment vehicle.
All convertible bond questions on the Series 7 refer to “corporate” bonds, namely they are bonds issued by companies.  There are no such things as convertible Treasury, U.S. agency or municipal bonds.  There are convertible preferred shares, also issued by corporations, but we will not be discussing them at this time.
Similarities between Convertible and Non-Convertible Bonds
Just like any other corporate bond, when you buy a convertible you are buying debt (lending money to) a corporation at a nominal rate of interest, paid to you semiannually.  You pay par value ($1000 per bond) and expect to receive par back at maturity.
Differences between Convertible and Non-Convertible Bonds
There are differences, however, between convertible corporate bonds and non-convertibles. You should expect to receive a lower nominal interest rate in return for the convertibility feature discussed below.  On the hierarchy of distribution of assets in case the company were to go bankrupt, a convertible normally ranks as a debenture or more often, a subordinated debenture.  Thus it is only above preferred and common shareholders.  Finally, even if you plan to hold your convertible until maturity and never convert it into stock, the market value of your convertible bond will fluctuate based on both the value of the company’s common stock and the general level of interest rates in the economy.
Convertibility Feature
What intrigues people about convertible bonds is the fact that they have control over deciding when or if to convert the bond into a set number of shares in the company.  At the time the convertible bond is issued, a conversion price is set.  To determine the number of shares the bond can be converted into, just divide the price of the bond ($1000) by the conversion price.
So if the conversion price is $40, $1000 divided by $40 equals 25 shares per bond as detailed in example 1 below.
Example 1

CR   =  25;  CP   =   ?
CP   =  $1000/CR   = $1000/25   =   $40
Secondary Market for Convertible Bonds
After the convertible bond is first sold, its value will be determined by the marketplace.  If the market price of the stock is below the conversion price, the bond itself is still worth $1000 at maturity.  Its market value will fluctuate inversely with interest rates just as all bonds do.  However, if the market price of the stock is higher than the conversion price, the price of the convertible bond will keep pace by staying at parity with the stock or, more likely, at a premium to parity.
Taking the example above, if the company’s common stock rose to $50/share, what would the convertible bond’s market price be at parity?  Since the bond can be converted into 25 shares, 25 times $50 equals $1250.  In other words, the bond that cost the investor par ($1000) to buy is now worth at least $1250 at parity with the stock.  More often it will be selling at a premium to parity, because it still carries the unused conversion feature.
If the bondholder expects the company’s common stock to rise significantly over time, the bondholder might take advantage of the potential future return on the stock by converting now rather than waiting to get just par ($1000) back on the bond at maturity.  The value of the bond is no longer just par, it is at least the price of the common shares multiplied by the number of shares it can be converted into.
Forced Conversion
Convertible bonds are usually callable.  This means the company that issued them may redeem them in advance of their maturity date, generally during times when interest rates are falling and its debt can be refinanced at a lower prevailing rate.  This presents a convertible bond holder with a conundrum:  should she allow her bonds to be called or should she convert the bonds into shares in the company?
This situation is often presented in the form of a Series 7 question as in Example 2 below.
Example 2
Sharon owns a convertible bond issued by XYZ corporation with a conversion price of $50.  XYZ’s common stock is currently selling for $57 per share.  XYZ is calling the bond in at a premium to par of 110 ($1100).  The bond market currently prices the bond at 112 ($1120).  Sharon asks her registered representative, Aaron, what she should do.  What should Aaron advise her?

a.)  Allow the bond to be called.
b.)  Convert the bond to shares of common stock.
c.)  Sell the bond in the secondary market place.
d.)  Hold the bond to maturity.
Option “d” can be eliminated, because it’s no longer a possibility.  The bond is being called now by the corporation and will never reach maturity.
To determine which of the remaining answers will provide Sharon the highest return, first determine the conversion ratio, CR.

CR   =  $1000/CP   =  $1000/50 =   20   =   number of shares per bond after conversion
The common shares are selling in the market at $57/share.  If she converts, Sharon will get a value of 20 x $57   =   $1140.  This is higher than what she would get from the corporation if she allows her bond to be called ($1100).  It is also higher than what she would receive by selling her bond outright in the secondary bond market ($1120).  So the best answer to the question is “b”:  convert the bond into shares.  Notice that the Series 7 exam will not take trade commissions into account when determining the right answer it is looking for.
Advantages and Disadvantages to the Company Issuing Convertible Bonds
Convertible bonds allow the company to issue debt (borrow money) at lower rates of interest than they would have to offer on nonconvertible debt.  However, if all the convertible bonds are converted to stock, this will increase the number of outstanding shares and thereby decrease the company’s earnings per share.  The equity for all stockholders will be diluted (decreased.)  This is the meaning of “fully diluted earnings per share,” which you will often see on a company’s income statement.  It does not mean that all convertible bonds have been converted.  It simply represents the effect on earnings per share (EPS) as if all the convertible bonds had been converted to common shares.
Effect of Stock Splits or Stock Dividends on Convertible Bonds
The conversion price and conversion ratio are guaranteed in the bond’s indenture and are not changed unless there is a change in the underlying stock, such as a stock split or a stock dividend.  The bond’s convertibility feature can not be diluted or diminished by such events.  Therefore if there is a 2 for 1 stock split by the company, doubling the number of common shares but cutting the price of those shares by half, there is no change to the overall value of those shares.  Nor is there a change to the rights of the convertible bondholders.  In this case, the conversion price (CP) is cut in half and the number of shares per bond (CR) doubles.  A stock dividend will have a similar affect on the conversion feature by decreasing the CP and increasing CR by the percentage increase in number of outstanding shares represented by the stock dividend.  Please see Example 3 below for a more detailed explanation.
Example 3
XYZ company declares a stock dividend of 1 share for every 5 owned to shareholders of record.  This represents an increase of 20% to the number of shares outstanding after the record date.  For every 5 shares the stockholder used to own, she now owns 6 shares.  However, the price of each share will drop by the same amount, 20%, on the ex-dividend date.  If the shares had been trading for $10/share before, they will now begin trading at $8/share at the opening on the ex-dividend date.
The convertible bondholder’s interest is protected against dilution in such an event:  his CP decreases by 20% and his CR increases by 20%.  Let’s say that the conversion price (CP) was originally $50.  This would give the bondholder the right to convert the bond into 20 shares ($1000 divided by $50 equals 20 shares.)  After the stock dividend takes effect, the CP would drop by 20% to $40 per share and the CR would increase by 20% to 25 shares per bond.